Book of Oz is an enchanting five-reel, ten-payline, high-volatility online slot. Brimming with fantasy, magic and adventure, the game welcomes players into a world filled with enchanted riches. Check it out here.


Featuring Wilds, Scatters, Free Spins and Re-Spins, the fantasy themed slot encompasses whimsical art and captivating symbols, such as the lion of courage, the potion of love, the mystical wizard and the golden book, which are displayed on the reels to leave players spellbound as they spin to win magnificent rewards. 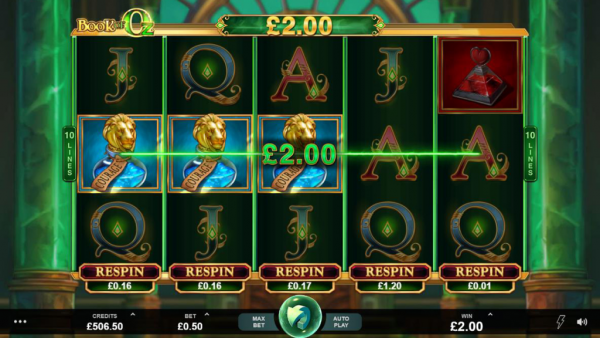 The Wizard’s Book acts as both a scatter and a wild, which can result in powerful wins. Three or more Book Scatter Symbols trigger 10, 12 or 25 free spins, providing players with the opportunity for more frequent feature triggers. High-paying expanding and illuminating symbols can potentially trigger wins of up to 5,000 times the initial bet in free spins.

The game’s Re-spin feature adds an element of thrill and excitement to the base game. After an initial wager, the player can pay to respin a single reel independently at an additional variable cost; for example, after a winning spin of four-of-a-kind Wizard symbols, the player can pay to spin the fifth reel to try to get five of a kind. Players can develop their own strategy within the base game after every result, including the opportunity to land more Wizard’s Book symbols to uncover the enchanted story within free spins.

Emerald riches lie in wait for players in Book of Oz, which will be available exclusively for Microgaming operators across desktop and mobile platforms from Tuesday 11 December.

David Reynolds, Games Publisher at Microgaming, comments: “Book of Oz is another fantastic creation by Triple Edge Studios enriched with magical artistry and packed with rich game mechanics. Players can listen to an intriguing soundtrack while immersing themselves in the game to uncover an enthralling storyline as they play. The Re-Spin feature adds a new dynamic twist to the overall gameplay, enhancing the level of engagement and it combines extremely well with the win potential in the game, where players can win up to 5,000 times their bet.”

Brendan Walton, Design Lead at Triple Edge Studios, adds: “We are extremely excited to release Book of Oz, our fifth game this year under the Triple Edge Studios brand. This has been the most fun we’ve had developing a game and the Re-spin feature is a brilliantly fun addition. Bespoke hand-painted art was created to help tell our fantastical tale. Infused with fantasy and adventure, Book of Oz will leave players spellbound. Stay tuned for more exciting games from us in the future, which we will be supplying exclusively for Microgaming.”

Copyright © 2004-2022 Casino Bonus Codes.
Gambing might not be legal in your area. We bring you Recentpoker.com as an information and gambling news site only. Recentpoker.com lists all the best online casino and online poker site bonus codes. In addition to gambling bonus codes, you will find honest online gambling site reviews, news and promotions. Enjoy